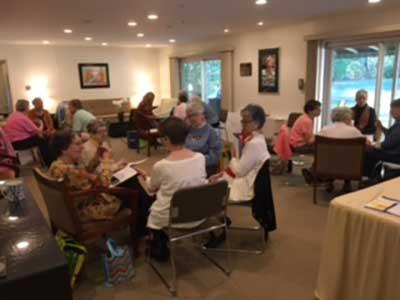 A recent gathering of the Sisters of the Holy Names of Jesus and Mary, held in the Stuart Center's Collins Room, begs us to ask the question: What digital divide?

First Sister Kathleen pulled out her iPad to remind everyone that she had emailed meeting materials to all and then sharing her Saint of the Day app with Sr. Carol, then Sr. Carol Anne used the Stuart Center's plug-and-play system to facilitate the opening prayer, followed by Sr. Eileen texting everyone a link to the youtube video they'd just watched. The Sisters appear to be a living example of the findings from last year's Michigan Stat University studay where researcher William Chopik finds that social technology use among older adults is linked to better self-rated health and fewer chronic illnesses and depressive symptoms. The findings are published online in the journal Cyberpsychology, Behavior and Social Networking.

“Older adults think the benefits of social technology greatly outweigh the costs and challenges of technology,” said Chopik, assistant professor of psychology. “And the use of this technology could benefit their mental and physical health over time.”

Using data from 591 participants in the nationally representative Health and Retirement Study, Chopik examined the benefits of using technology for social connection among older adults (participants’ average age was about 68). Social technology included email; social networks such as Facebook and Twitter; online video or phone calls, such as Skype; online chatting or instant messaging; and smartphones.

Previous research on technology use across the life span has focused on the digital divide – or the disparities between younger and older adults – painting a rather bleak picture of seniors’ ability and motivation to adapt to a changing technological landscape.

But Chopik’s findings challenge this interpretation. More than 95 percent of participants said they were either “somewhat” or “very” satisfied with technology, while 72 percent said they were not opposed to learning new technologies.

“Despite the attention that the digital divide has garnered in recent years, a large proportion of older adults use technology to maintain their social networks and make their lives easier,” Chopik said. “In fact, there may be portions of the older population that use technology as often as younger adults.”

The study also found that social technology use predicted lower levels of loneliness, which in turn predicted better mental and physical health. Participants who used social technology more generally were more satisfied with life and had fewer depressive symptoms and chronic conditions such as high blood pressure and diabetes.

“Each of the links between social technology use and physical and psychological health was mediated by reduced loneliness,” Chopik said. “As we know, close relationships with other people are a large determinant of physical health and well-being, and social technology has the potential to cultivate successful relationships among older adults.” (For more, see MSU Today, Health, Life, Science & Technology, Aug 2016)

While the Sisters may not know how their iPhone, Surface, and Macbook impact their health, the nurse who is leading a Power Point presentation regarding advanced-directives, seems to be pleased with their technological savy.