We are embarking on a new project for the formation and professional development of educators in collaboration with the National Conference of Catholic Bishops of Cuba.  Reyna Gonzalez and Imma De Stefanis recently spent a week in Bayamo, Cuba as part of a new alliance between the Stuart Center and the Bishops’ Conference.  In this new venture we have been able to recognize and bear witness to the new life that is emerging in Cuba. It is life that is generated in the small and everyday aspects of life, in the constant search of the people to learn, share their richness and their heritage.

We have witnessed the life of sacrifice and commitment of the lay and religious, of the priests, missionaries and Bishops that have sustained and strengthened the faith, hope and sense of ONE BODY in the Cuban Church. 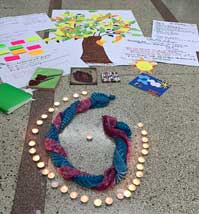 We were confirmed in the Chapter 2016 call To Be and to Act as One Body: To revitalize our unity in diversity and to act as one Body, dynamic, interconnected, linked with other bodies, in the world and as Church, in order to share, collaborate, and be in solidarity among ourselves and with others. We feel we are forming one body in the Spirit of the Church which is acting as a catalyst for positive change and empowerment of the people.  For us another concrete way of being and acting as one body, is in the collaboration we share with other non-profit organizations.  We were joined by two lay women who collaborated in this project.  One was María Cristina Fernández-Galán, Coordinator of the Educators’ Project in San Luís Potosí which is part of Iyolosiwa, AC, a non-profit organization of the Mexico Province.  The second was a volunteer, Yolanda Infante, a paralegal who works with the immigrant community in New York.  As our work in Cuba continues we hope to invite more lay and RSCJ collaboration, particularly from the Philippine Region.  It is an invitation to embark into new territory in this opportunity to collaborate in Cuba.

The title of the week-long professional development workshops was Our Being and Doing as Educators.  Topics within the workshop included:  Vocation as educator; leadership; spirituality; resilience; Myers-Briggs; and a project development segment to bring to life the dreams they have for their students and educational systems.  The project development portion took place in teams.

Cuba is mission territory; territory of Faith and Hope and we firmly believe that the Church possesses a prophetic voice and is having its effect as water, drop-by-drop, in the transformation of people and communities. It is a gift and great opportunity to be part of this moment as Society and Stuart Center. 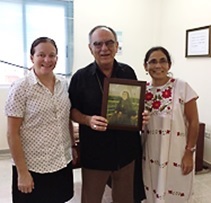 We had the opportunity to meet with Monseñor Álvaro Beyra Muarca.  He expressed strong interest in a continued collaboration. After many years the State turned a former Catholic school building over to the Diocese.  The building was in great disrepair but they are slowly making progress in its renovation to serve as an educational and community center.  We will work with them in the design and plan development for this center which includes our return to Cuba next year.    We gave Bishop Beyra the image of Philippine on the Rebecca, the ship that brought her from France to the New World. He said to us:  “We wait for you here; embark with Cuba. May the Rebecca stop here!”

As Society of the Sacred Heart we are also called to reach new frontiers: To go out, to set sail as a Society and go with others to new geographic and existential peripheries1 to accompany the life that is emerging there, to defend justice, peace, and the integrity of creation in response to all of those who are searching for meaning in their lives, those who have been wounded, displaced, and excluded because of poverty, violence, and environmental degradation. In Cuba, processes of transformation are emerging and the Cuban Church has its prophetic role.  We believe that as a Province and international Society, we must be there, learning, accompanying and sharing in the journey to new life.

José Martí, Cuban national hero and one of the greatest turn-of-the-century Latin American intellectuals said: “Here, then, is what the teachers have to carry into the fields; not only agricultural explanations and mechanical instruments, but the tenderness that is so lacking and does such good in people.  In short, it is necessary to launch a campaign of tenderness and science, and to create therein a body that does not exist, of missionary teachers which (people) so much need and so much good.

In short, it is necessary to open a campaign of tenderness and science, and create for it a body, which does not exist, of missionary teachers.”  Let us be missionary educators!

To learn more about our collaboration in Cuba or how to support our work there please contact: Reyna Gonzalez, rscj at:    rgonzalez@stuartcenter.org